All jokes aside I remember being quite worried about what the language barrier would be before moving to Macau…. Would I have to learn Cantonese, arguably one of the most difficult languages one can try to master, even more difficult than Mandarin.

These days I know more than a few key words and phrases like saying good morning, or how to tell the taxi driver to take me to work or the ferry terminal, I would say I’m still far from fluent and while I try to learn a new word or phrase per week I’m always secretly afraid I am telling someone to shut up vs actually saying good morning to people. That would make for an awkward day in the office.

Luckily I would have to say that I have not had any major issues with getting by on English, I haven’t been ripped off, or had major communication issues at the bank or at the airport the types of places where you definitely don’t want to hear about a mix up.

Macau will test your patience, sometimes you’ll have to repeat yourself two or three times and may still not get exactly what you are looking for. I would say that the people who you are dealing with are really trying their best to help you, and in reality this interaction in English with you may be highly stressful for them, so I always give people the benefit of the doubt.

I will say that the place where I struggle the most has been with taxi cab drivers, I actually try to avoid them as much as possible because for one the communication issue and for two the fact that many times they are not really happy to take you where you want to go. Sometimes however it is unavoidable, when you have to get to the airport in a hurry or have luggage with you there is really no other option. Your best bet here would be to have a picture with you of where you are trying to go. A simple google image search should get you whatever picture you are looking for. I’ve also had coworkers write down the name of various locations and I simply save them as images of where I am trying to get to.

Its not always the cabbies fault, there was the time I told him to take me to my apartment in Cantonese… when I was in fact already at my apartment (I was trying to get to work)… Luckily they didn’t charge me the fare and simply gave me a crazy look and pointed at my building.

Below are two images that I’ll use when I need the cab driver to take me to the ferry terminal. There are two ferry terminals in Macau and two ferry companies Turbojet, and Cotai Water Jet. But I’ll go into detail of the ferry terminal and getting to Hong Kong on another post. The one on the right is for a local Thai restaurant, go ahead and use it, its delicious! 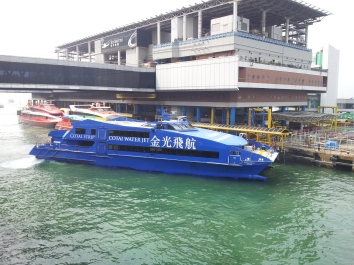 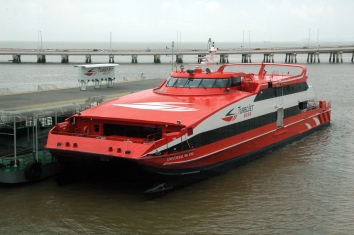 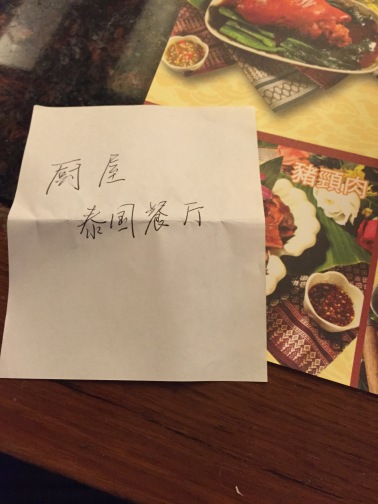 The one place where you wont find any trouble communicating in english is in the casino’s, most staff that have interaction with guests such as in a restaurant, concierge or the front office are highly fluent in English.

I have to add that the younger demographic in Macau I would say those in their early to mid twenties have a fairly decent mastry of the english language, much more so than the older generation. This is to be expected I suppose…

Lastly if you’re moving to Macau for work such as I did you may be aprehensive about what it will be like to work with the local macau people or what level of language you can expect from them. Without giving to much away I am a Director at one of the local casino’s, all of my managers speak english, some better than others but we get the job done. I have a variety of different staff, some with a college education and some without as well as a mix of professional staff such as accountants and unskilled staff such as cashiers. So all in all its a bit of a mixed bag. In general if your employees went to college you can expect a certain degree of english from them, if they are in a higher position such as a seniors, supervisors or managers then English tends to be the language that business is done in. For my employees that don’t speak any english I learn to say hello, or good morning but for the most part expect my manager to communicate with them dirrectly. So fear not if this was one of your worries.

Signing off from Macau!